Getting Started with Windows Batch Scripting

Windows batch scripting is incredibly accessible – it works on just about any modern Windows machine. You can create and modify batch scripts on just about any modern Windows machine. The tools come out of the box: the Windows command prompt and a text editor like Notepad.exe. It’s definitely far from the best shell scripting langauge, but, it gets the job done. It’s my “duct tape” for Windows.

The universal text editor for batch files is Notepad (Windows Logo Key + R > Type notepad then Enter). Since batch files are just ASCII text, you can probably use just about any text editor or word processor. Very few editors do anything special for Batch files like syntax highlighting or keyword support, so notepad is good enough fine and will likely be installed on just about every Windows system you encounter.

Assuming you are using Windows XP or newer, I recommend saving your batch files with the file extension .cmd. Some seriously outdated Windows versions used .bat, though I recommend sticking with the more modern .cmd to avoid some rare side effects with .bat files.

With the .cmd file extension, you can use just about filename you like. I recommend avoiding spaces in filenames, as spaces only create headaches in shell scripting. Pascal casing your filenames is an easy way to avoid spaces (e.g., HelloWorld.cmd instead of Hello World.cmd). You can also use punctuation characters like . or - or _ (e.g. Hello.World.cmd, Hello-World.cmd, Hello_World.cmd).

Another thing with names to consider is avoiding names that use the same name of any built-in commands, system binaries, or popular programs. For example, I would avoid naming a script ping.cmd since there is a widely used system binary named ping.exe. Things might get very confusing if you try to run ping and inadvertently call ping.cmd when you really wanted ping.cmd. (Stay tuned for how this could happen.) I might called the script RemoteHeartbeat.cmd or something similar to add some context to the script’s name and also avoid any naming collisions with any other executable files. Of course, there could be a very unique circumstance in which you want to modify the default behavior of ping in which this naming suggestion would not apply.

Notepad by default tries to save all files as plain jane text files. To get Notepad to save a file with a .cmd extension, you will need to change the “Save as type” to “All Files (.)”. See the screenshot below for an example of saving a script named “HelloWorld.cmd” in Notepad. 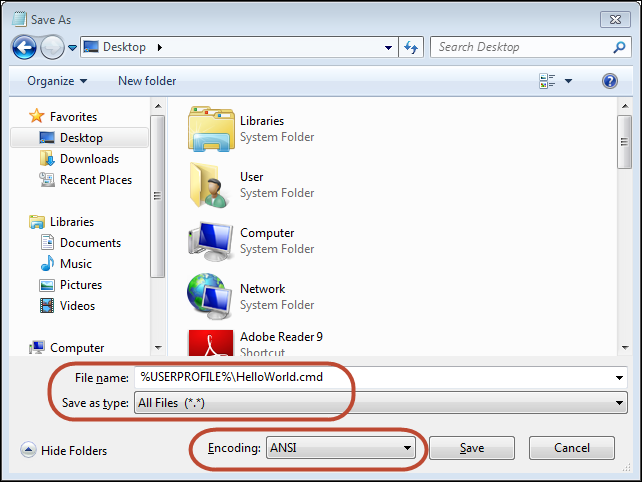 The easy way to run your batch file in Windows is to just double click the batch file in Windows Explorer (aka “My Computer”). Unfortunately, the command prompt will not give you much of a chance to see the output and any errors. The command prompt window for the script will disappear as soon as the script exits. (We will learn how to handle this problem in Part 10 – Advanced Tricks ).

When editing a new script, you will likely need to run the batch file in an existing command window. For newbies, I think the easiest foolproof way to run your script is to drag and drop the script into a command prompt window. The command prompt will enter the full path to your script on the command line, and will quote any paths containing spaces.

Some other tips to running batch files:

The official way to add a comment to a batch file is with the REM (Remark) keyword:

The power user method is to use ::, which is a hack to uses the the label operator : twice, which is almost always ignored.

Most power authors find the :: to be less distracting than REM. Be warned though there are a few places where :: will cause errors.

For example, a FOR loop will error out with :: style comments. Simply fall back to using REM if you think you have a situation like this.

The first non-comment line of a batch file is usually a command to turn off printing (ECHO’ing) of each batch file line.

The @ is a special operator to suppress printing of the command line. Once we set ECHO’ing to off, we won’t need the @ operator again in our script commands.

You restore printing of commands in your script with:

Upon exit of your script, the command prompt will automatically restore ECHO to it’s previous state.

Batch files invole a lot of trial and error coding. Sadly, I don’t know of any true debugger for Windows batch scripts. Worse yet, I don’t know of a way to put the command processor into a verbose state to help troubleshoot the script (this is the common technique for Unix/Linux scripts.) Printing custom ad-hoc debugging messages is about your only option using the ECHO command. Advanced script writers can do some trickery to selectively print debugging messages, though, I prefer to remove the debugging/instrumentation code once my script is functioning as desired.